As a woman who travels and hikes on her own, I often get asked questions like; Aren’t you scared to be on your own, what if something happens to you? The answer is no, I’m not scared to travel and camp on my own. I actually love it. The only time you can have true freedom is when you are the only one making the decisions. That’s not to say I want to travel alone all the time, I just have no choice.

However, there are risks, but then everything we do in this life involves risk. To quote an old favorite; you can get hit by a car while crossing the road. Every time you drive, fly, get on a boat, train, walk up the stairs, walk down a city street, even sleep in your own bed, something can go wrong. Some of the worst injuries I’ve sustained have happened in my own home, and I’m not referring to my vehicle. It’s just life. We accept that, but we don’t walk around paralyzed with fear all the time. 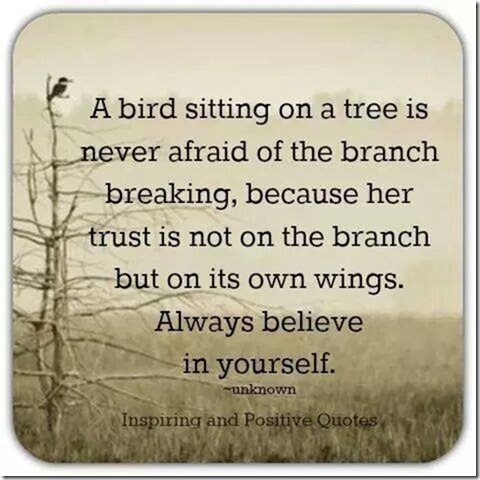 I go out and camp on my own, it’s as natural to me, as it is for a person to drive home from work or shopping and put their key in the front door. I do it every day and in a lot of different places. Finding a place to camp for the night and getting a feel for the area around me is just part of the routine.

A lot of the places I go used to be considered fairly remote, but in the past ten years, our ever-growing population and easy access to information about places to go, (and numerous other reasons) are encroaching on those quiet places. It’s pretty rare to find a place to camp for a few days without seeing another person. ATV’s, OHV’s, 4×4, horses, dirt bikes, Jeeps, SUV’s they are all venturing deeper and deeper into the remote areas that used to be, so it’s highly likely that if I break down help will come along eventually.

However, there are times that I actually haven’t seen people for days on end, or am in an area without cell phone reception. There are other times I throw on a pack and take off from camp to explore an area with no trail and with no-one around. I’ve done it a lot and in areas without cell reception, and I admit, if something happened I could be in a very difficult predicament. I’ve had to accept that possibility. I would have to deal with it, whatever the outcome.

You can say that hiking on your own is a stupid thing to do, and I don’t necessarily disagree, but what is a person supposed to do when there is no-one in their life to hike with. Just give up? Sit in the van and get fat, I can do that in a stick and brick, I don’t come out here to gaze out my window and see nature from a distance.

I’ve hiked on my own most of my life because if I listened to what the authorities say I should do, I’d never do anything. The general rule for hiking is not to hike alone, they warn you about the snakes, bears, and mountain lions, that can get you. There are rocks that can trip you, insects that sting, cliffs that crumble, lightning that strikes, there are so many dangers in the wild and the signs blare at you; don’t hike alone, don’t hike alone!

I could bore you with a list of reasons why it just not possible for some, but I won’t. Some people have no choice, it’s that simple. Even when I lived in a decent sized town in the Colorado mountains, in a place where there were hundreds of miles of hiking trails all around, finding a hiking partner was very hard and hiking with someone was a rare thing. I wouldn’t have climbed half the peaks in Rocky Mountain National Park that I have if I’d waited for someone to do them with me.

Do I get nervous? You bet! Even going a mere half mile from camp puts things into perspective when there is no cell reception and no people within screaming distance. I do a lot of backtracking when I don’t feel confident about a certain rock scramble or slope. I’m not some wild, adrenaline pumped person who takes big risks, but all it takes is a moment’s lack of concentration to end up in trouble. One quote that was always drummed into us in wildland firefighting was, Complacency Kills, and I’ve never forgotten it.

While in Ehrenberg after the RTR, Bob Wells of CheapRVLiving.com approached me and asked if I’d be willing to test out some personal locator beacons for him over the next 9-months or so, and I agreed. I’d considered getting a SPOT device a few times but had always backed off because of the cost of the item and the service. This was my chance to test one out. 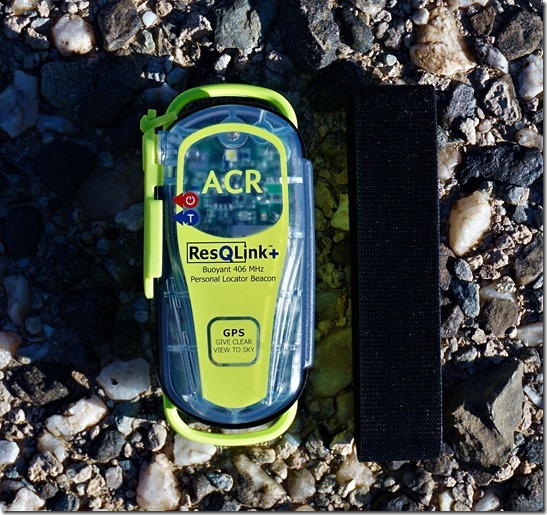 The two I’ll be testing first are the Spot GEN3, and the ResQLink+.

The ResQLink+ is purely for a life-threatening emergency only. The second that handle is lifted, and the button is pushed, help is on the way. If you have a broken arm or a sprained ankle or break down at the side of the road, this is not the PLB to use. There are BIG fines involved with this if it’s used incorrectly.

Here is a short YouTube video I made of my testing the ACR ResQLink – Do You Hike Alone? What If?

I hope I don’t have to use it at all, other than to do a test of it. If I did have to use it, it would mean that something had gone seriously wrong, and I don’t want to test it that badly. However, I hope I get at least one adventure that is wild enough to warrant bringing it along. Maybe a rafting trip or something because it’s waterproof.

I started testing The SPOT3 Satellite GPS Messenger shortly after leaving Ehrenberg in February 2017. The $150 device weighs 4oz (with batteries) and can send 1-way emergency and non-emergency messages. There is also a breadcrumb tracking feature so that friends and family can see where you’re hiking by accessing a password protected web page. The annual fee for using the device is $150.00. There are other options you can add, like roadside assistance notifications for an additional fee (which Bob added to my device a couple of months later). The SPOT also comes with some DeLorme software that allows a person to record their adventure, and share it with friends or publicly. Through a rather cumbersome process, I can add my locations to the map using the GPS coordinates recorded by my SPOT device, and then add a little story, pictures and so on. I did this for a while, then stopped when I realized no-one was interested in viewing it. It was a LOT of work.

I don’t want to reveal too much about my experiences with these devices while I test them, I’ll save the juicy stuff for Bob, but I will mention it occasionally in my posts and on YouTube. I have created a Playlist for the Personal Locator Beacon Tests and Results if you’d like to view them. 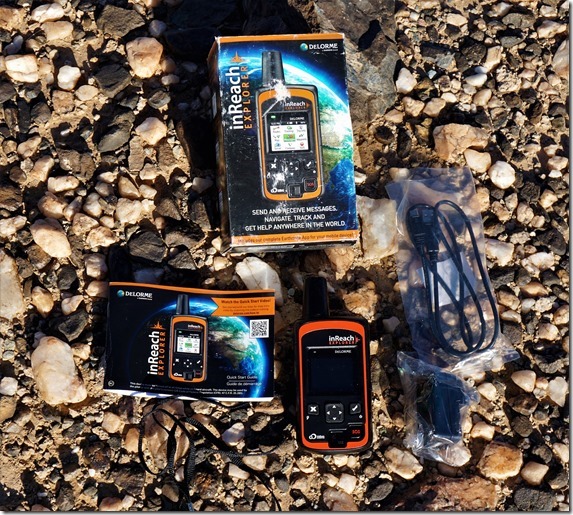 The third device I’ll be testing is the InReach Explorer. It does a lot of things in addition to getting help on the way when needed. You can post things to Facebook via satellite on this by using a smartphone, text people, navigate, route-find and much more. I’ll only be testing it for one month, but I’m saving it for when I plan on doing something very remote, preferably with no chance of cell service at all and probably in Utah.

HERE ARE LINKS TO THE TWO LATEST POSTS I MADE ABOUT THE PLB I TESTED AND THE RESULTS:

PART ONE (About the devices) & PART TWO (My recommendation, and why). (Updated in February 2018).

Until next time, keep stepping outside your comfort zone.

IF YOU ENJOY THIS CONTENT PLEASE CONSIDER SHOWING YOUR SUPPORT BY TREATING ME TO A CUP OF COFFEE: